We were deep in the process of downsizing when we got stuck in this thing called a pandemic. You might have heard of it, Covid-19 pretty much shut down the world for the better part of a year and we were unable to hold any kind of downsizing sale during that time. We had whole rooms full of items that needed to be sold so that we could move forward with our plans to sell our house, move into an RV, and travel the country. So while we waited for the world to reopen, we kept going through our stuff and filling up rooms with piles of things that we wouldn’t be taking with us. We sectioned off the house with a couple of rooms designated for the sale, one room for items that would be coming with us on the road, and another room for items to be transferred into a storage unit for safe keeping. It wasn’t until April 2021, when we were finally able to get fully vaccinated, that everything started to fall into place. 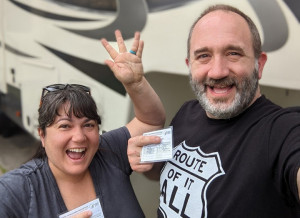 The very weekend after we reached full vaccination we held our first sale. Our 2500 square foot house and two and a half car garage were so full that we hardly had any walking space. We decided that the goal of this first sale was simply to get things moving in order to clear out a lot of the clutter and make room for house renovations. The house was built in the 1970’s and needed some work done before we felt like we could put it on the market to sell. We had already tackled the biggest projects by putting a new roof on the house after Hurricane Delta and filling in the swamp of a pool in our backyard.

It took no time at all for us to fill up the garage. Just as we were starting to spread word about the sale, a good friend convinced us to call it a moving sale instead of a garage sale. We were hesitant since we didn’t know exactly when we were moving, but it turns out this was the best advice we could have received. “Call it what it is” our friend said, “your intention is eventually to move.” Calling it a moving sale attracted buyers who were looking for what we were offering: We had a whole house worth of stuff. Calling it a moving sale prompted people to ask this very important question, Where are you moving?

That question changed our lives.

We knew we were moving into the RV, so that’s what we told people. We pointed at the 34 foot RV parked in the driveway and said we were moving into it to travel the country. That simple gesture sparked intrigue and even more questions, the most significant being, “so are you gonna sell the house?” To which we replied “yes and we’re meeting with our realtor tomorrow morning.” As a joke we laughed and added, “unless we get an offer today.” 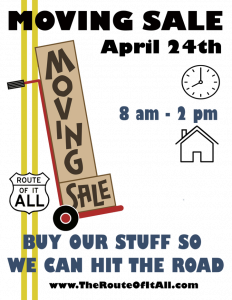 At that moment it became clear that more than one person was listening to our conversation. Upon hearing our response, five heads abruptly turned to face us and one body shot out of the garage! Thirty minutes later a woman showed up and said she heard we were looking to sell. She and her mother expressed an interest in the house and asked for a tour. Alicia did a walk through of the house with them, expecting at any moment for them to say thank you so much, we’ve seen enough but we aren’t interested. That’s exactly what didn’t happen! Alicia got to the end of the tour and explained that the master bath was the next renovation we hoped to accomplish, which is why it had no vanity and was down to the concrete floors. After a long pause the woman made us a good offer for the house on the spot and followed up with the most wonderful phrase: “Please stop all renovations because I want to do them myself.”

We had a moving sale and sold the house as is; now that is what you call a very successful moving sale! None of this amazing story would have been possible without following the simple but brilliant piece of advice; call it what it is, don’t call it a garage sale, call it a moving sale. Sometimes the simplest things can prompt the biggest changes. 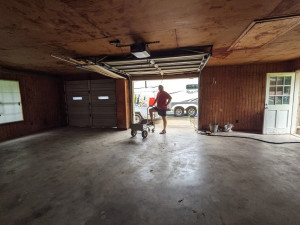 The catch was we had one month to move! May was a whirlwind. So much to box up, so much to move, so much to donate! After so much preparation for the moving sales, we had two, it might seem like the rest of the moving process would be simple. But we found it far from simple. It was very hard to take the next step when you have to take so many steps at the same time. Task saturation is real thing: Every day in May felt like a week. It rained so much the week we moved into the storage unit that we had to rent a covered trailer. The last 48 hours we didn’t sleep. Moving into the RV was easy: moving out of the house was H-A-R-D. 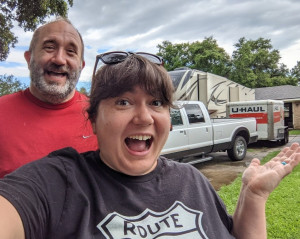 Sign up for our Newsletter and get notifications on future blog posts. 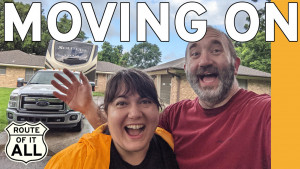 Check out our video, Moving On!